How to start a Homebrew Club

Words and images by Dave Parry

You quite like homebrewing and you have your own set-up at home that you are very proud of. You can only drink a certain amount of beer so you only brew maybe once a month or two. You talk to your friends about brewing and they are vaguely interested, but it’s something that you do and they don’t. They might have joined you a couple of times to brew together and have enjoyed the experience but aren’t taking it further.

That’s where I was about a year ago and I was discussing with some of those friends about how they could get more involved. I considered setting up a commercial brewery. I even researched the tax and other registration requirements of doing that. Having looked into it though, I discovered that it’s very hard to make it work on a small scale. And it sort of misses the point because my friends wanted to take part in the brewing of beer as much as they wanted a share in the produce.

The Brew Club. The Brew Gear.

After a couple of iterations we settled on a model that we call a brew club. It’s more of a cooperative, really, of like-minded people who share the same brewing equipment.

The brewery is set up in my garage and consists of a three vessel all grain system with electrically heated hot liquor tank, a mash tun with Herms system and a propane gas heated kettle with 25 litre conical fermenters. It’s not exactly a glamorous set up, but neither is it the sort of thing that a casual wanna-be homebrewer would necessarily start with.

But one thing was clear: I didn’t want to be bottling for everyone. It’s the part of the process I like the least. So a condition of being involved would be to purchase a 5L mini keg from Dark Farm with tap dispenser and CO2 gas system. This costs just over £100 and is enough to flush out someone who casually expresses an interest but then doesn’t commit, but not so much that it excludes people who would like to get involved. Not only that, but when people see their new mini keg they get very excited about the whole idea.

We held our first session just after the summer holidays in 2019 and have brewed around twice per month since then. The members all enjoy having their own beer on tap, which is always a talking point when friends visit the house. They have also been able to talk about being a brewer or having their own brewery. There is a real sense of pride in our collective efforts. The members have also contributed pieces of equipment to upgrade the equipment in the Brewery. 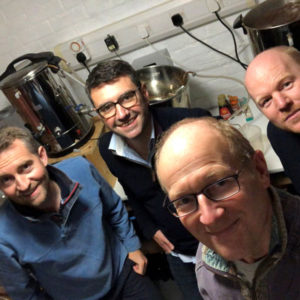 The Money and Legal Bit

We are keeping the finances very simple and obviously compliant with HMRC. We charge our members £10 each per brew session to cover the costs of the ingredients, fuel, other consumables, and equipment. Everyone is aware that they are not buying the beer and they are not able to sell it. This is strictly for domestic use. I have contacted HMRC and they are happy that this fits the definition.

After six months in full-scale operation we are now up to 11 members. We have already upgraded so that we can brew 50 L batches so that everyone can have a share if they want. It can make the garage a bit crowded at times, but we always need someone to make the bacon sandwiches or order the takeaway.

And give us a shout too – we can help set you up with some kit like 5L and 10L mini kegs with our special Homebrew Club discount! Email: gareth@darkfarm.co.uk or call 07890 577017 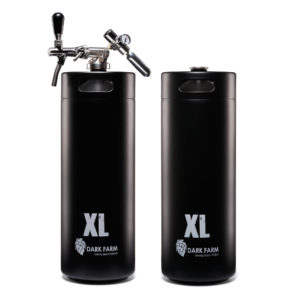