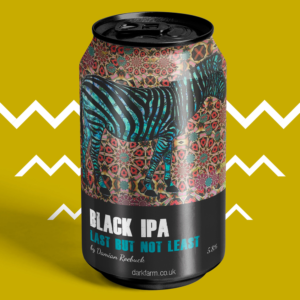 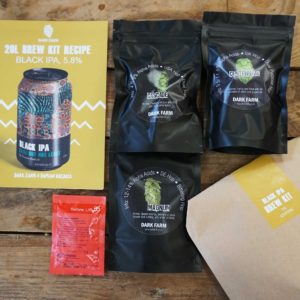 The black malt in this recipe kit, along with a pale and chocolate malt, combined with the Magnum, Cascade and Centennial Hops lend themselves perfectly to a Black IPA.

This brew kit includes all you need for an outstanding 20L batch of Black IPA, including 4.5 kg of quality grains and 170g of stunning hops:

The story behind the kit

Damian Roebuck, recipe creator: “When Gareth emailed the Brew Crew with a list of ingredients, from which we were invited to create a recipe, I immediately knew what I wanted to brew.

The black malt stood out like a beacon, but not for use in the obvious stout or porter. Ever since I’d tried a roast coffee pale ale in an amazing bar in Santa Barbara, I’d been intrigued by the juxtaposition of colour and flavour and the confusion it can cause to the senses. The black malt, along with a pale and chocolate malt, combined with the Dark Farm Magnum, Cascade and Centennial Hops on offer lent themselves perfectly to a Black IPA.

As the amount of malt on offer was limited, ensuring there was enough to go around the Brew Crew, I was initially worried that the percentage of black malt might impart too much flavour. But as I said to Gareth; there’s only one way to find out.

I devised the recipe so that the Cascade and Centennial hopstand, combined with the Centennial dry hop would add just enough hop burst to mute the chocolate and roasted flavours from the malt, but not so much that they didn’t shine though.

Did that work? I’ll let the drinker be the judge of that!”

About our new brew kits

After producing our very successful collaboration brew kit with Pauls Malts and Brookhouse Hops earlier this summer, we decided to go one step further. We asked our awesome Brew Crew to unite (remotely) and conjure up some brews. And they really pulled it out the bag! After a few months of brewing and a lot of tasting, we are excited to announce the launch of four wicked new kits: a Black IPA by Damian Roebuck, a Mild by Richard Boyden, West Coast Red Ale from Dan Plummeridge and Blonde Ale from Daniel Ennis. The brew kits are all available on darkfarm.co.uk and all Hop Clubbers will get their usual 10% discount.

If you think you have a recipe worthy of a shoutout – or even turned into a brew kit to be brewed across the country – please get in touch on gareth@darkfarm.co.uk